The formation of a co-operative society occurs when persons with common economic, social, and cultural goals come together voluntarily to create an organisation. The primary goal of this society is to meet the needs of the poor and those living in rural areas of the country. It is critical to the advancement of settlements.

Characteristics of a cooperative society 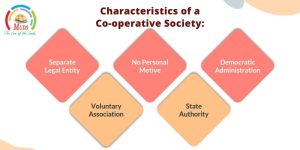 Let’s discuss these features in detail

The Co-operative Societies Act requires a cooperative society to be registered. Registration establishes it as a distinct legal entity. Its existence differs significantly from that of its members.

Only when all members freely take on the task of creating one can such a society be formed. A co-operative society can be joined or formed by anyone who shares a common interest. Members can also leave the association at any time by notifying the other members.

Members of a co-operative society cannot have any personal motives because they are working towards a common goal. The primary goal of co-operatives is to provide services to their members rather than to make a profit. Profit maximisation is a critical goal for other businesses, but it is not for co-operatives.

Despite the fact that agriculture is the primary source of revenue and employment in rural regions, the situation is farcical in that the vast majority of rural residents are impoverished and hungry. The cooperative society is critical to addressing the deplorable conditions in rural areas.

Let’s talk about some of the ways through which the cooperative societies have benefited the rural population, in order to understand more about it:

Despite their significant contribution to rural development, cooperative organisations face a number of challenges. The main problem they face is the shortage of funds. It’s working capital is low and insufficient due to which they are unable to meet their requirements . As a result, these societies face a significant financial dilemma and are unable to pursue their job properly. Furthermore, because politicians employ cooperative societies as a vote bank, these society can be easily exploited by politicians which can be a real task to deal with.  Furthermore, there have been occasions where certain members of these societies have joined the organisation for personal advantage. It deviates from the initial objective and causes a schism in the community. 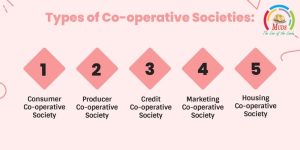 These communities cater mostly to clients seeking lower-cost household goods. The organisation purchases items or products in big quantities directly from the producer at wholesale costs and resells them to its members, obviating the need for an intermediary. The goods are sold in cash to both members and non-members.

In a competitive market, these types of organisations, sometimes known as industrial co-operatives, watch out for small-scale manufacturers. Within the cooperative, production and distribution are managed. Farmers, ayurvedic herbal medicine makers, organic product dealers, handicraft or handloom producers, artists, and so on are examples of these producers.

Bill,’ which got royal assent from both houses of parliament before it came the law, in order to promote such needs.

It can further be divided into two categories:

Any organization needs to be registered, as after the registration it enjoys various benefits. The registration of  credit cooperative society will allow it to:

These are urban and rural financial societies that offer low-interest loans to members, shielding them from large debts owed to traditional moneylenders. In a sense, they perform a fundamental yet highly personalised banking function. Savings accounts, FDs, RDs, pension plans, and other deposit options are available.

Housing co-ops are a type of society that provides low- and middle-income people with inexpensive housing. By purchasing shares in the cooperative, one can become a member. Instead of owning real estate, members own a share in the corporation as a whole, which provides them with a home. These communities are frequent in both urban and semi-urban areas. They build apartments or flats for members to live in and collect money in installments.

Cooperative societies play a major role in the development of rural areas. These societies have proved to be a helping hand in rural development. Although they have to face several challenges like shortage of funds, etc.  Despite these obstacles, cooperative organizations are playing an increasingly important role in the development of rural communities across the country. The involvement of cooperative societies will be critical to the future success of rural communities. Every Indian citizen should recognize the value and relevance of cooperative organizations, as they contribute significantly to economic equality and welfare. A thriving network of cooperative societies enhances the standard of living of the weaker and middle-income sectors of society as agents of change and reformation, although formally channelizing money lending they are not the dominant public or private financial institutions.