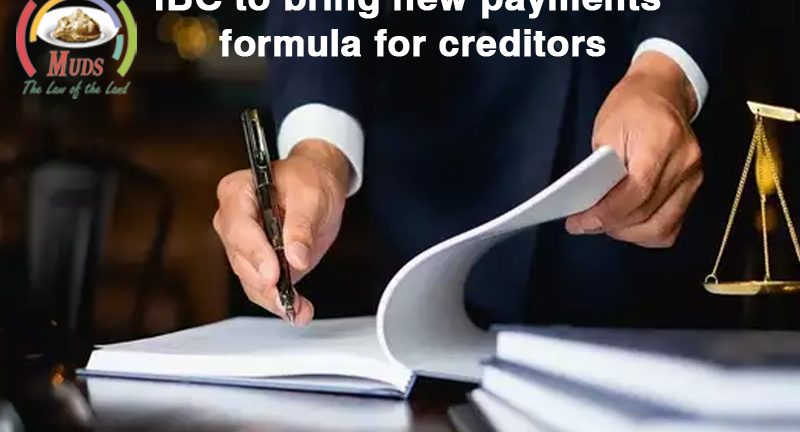 In recent years the government of India has been putting in lots of efforts to improve the economic scenario and the ‘ease of doing business’ here and in this process has brought numerous new acts and laws or amended them accordingly.

One remarkable step into this direction is the introduction of the Insolvency and Bankruptcy Code, 2016 (IBC) which is an outstanding tool to tackle the growing number of corporate debts.

Its most significant feature is that it sets out a time-bound resolution process dealing with debts, defaults and financial failures of Corporates. Designed to provide a robust mechanism for insolvency and liquidation, it was hailed as a perfect tool by all stakeholders.

IBC has taken off as a great hit since its enactment but like everything that is new and untested, it is facing some teething problems. As the various provisions of the Code are put to practical use, the gaps and inconsistencies have come to the fore, which need more clarity or changes. There have been various outstanding verdicts that have triggered the need to streamline the mechanism even further.

“Thus, in its three years of the journey, there have been several instances of path-breaking changes being made through amendments in the Insolvency and Bankruptcy Code, 2016.”

New Payments Formula on the Anvil

The government has been facing lots of criticism and dissatisfaction regarding the provisions of IBC in the distribution of insolvency funds.

The unsecured lenders and operational creditors have been crying foul and to add to it, in recent months there have been some judicial verdicts that are not in line with the Code’s desired distribution priority.

Thus, to overcome the lapse and create a balance, the government is contemplating a new formula for payments to creditors of distressed companies resolved through the IBC, 2016.

Drawbacks of the Present Provision

As more and more cases of insolvency and liquidation under the Insolvency and Bankruptcy Code 2016 goes ahead, distribution of the resolution proceeds amongst all stakeholders, financial creditors, operational creditors, and unsecured lenders, has become the bone of contention.

Currently, the distribution of proceeds is decided by the Committee of Creditors (CoC) consisting of financial creditors and this has led to dissatisfaction among other creditors, lenders.

The disputes related to the distribution of funds amongst all the creditors and lenders have become the key factor for extended litigation, instead of a satisfactory closure.

As a result, some of the biggest insolvency cases have got bogged down in litigation, slowing down the insolvency process instead of speeding up as was desired after the implementation of the Code.

Insolvency and Bankruptcy Code, 2016 is one of the signal reforms by the Modi government which has been brought about in its endeavour to hasten the insolvency resolution and clean up banks’ book.

Looking at the delays and discontent, the government is acutely aware of the serious gaps in the law and hence, it is seriously mulling tweaking the formula of the distribution of proceeds.

A senior government official, who has the knowledge of the ongoing consultations, confirms that the government intention to change the rules had come from the “highest levels of the government.”

The Corporate Affair Secretary, Injeti Srinivas, also confirmed this news while briefing reporters following a meeting between Finance Minister Nirmala Sitharaman with Bankers on IBC issues. Giving more information on the subject, he stated, “The possibility of formula-based distribution (of assets) which is fairly elaborate which can give best option and reduce litigation and reduce time for litigation with (section) 29A getting settled beyond doubt, the only litigation area essentially is who gets how much, if that can be resolved in an effective manner that could be the real thing.”

There are a few major cases that have drawn the attention of the government and the frameworks towards the lacuna or gaps in the current provisions of IBC.

One such high profile case is the ongoing Essar Steel case which at the moment is in the Supreme Court which will finally decide on the distribution of the proceeds.

Essar Steel case had been admitted in the National Company Law Tribunal (NCLT) in August 2017 and has been embroiled in legal battles till this date.

Billionaire L.N. Mittal-owned ArcelorMittal made Rs 42,000-crore bid for the debt-ridden steel manufacturer Essar, and the same was approved by the Adjudicating Authority, i.e. NCLT, in March 2019. But Arcelor Mittal’s eligibility was challenged by the original promoters, the Ruias, and they opposed approval of the plan.

The Operational creditors also gave a thumbs down to the plan owing to the discriminatory treatment meted out to them. Financial creditor Standard Chartered Bank also opposed the resolution plan on the same grounds and dragged them to the Court.

After the National Company Law Appellate Tribunal (NCLAT) ordered proportional recovery for both financial and operational creditors, the financial creditors got miffed and moved to the Supreme Court. And hence, the squabble continues, eroding the very essence of IBC, which was to usher in a time-bound and fast solution.

He also ascertained that the government is exploring different options through which to make the IBC process more unambiguous that will help minimize litigation. Elaborating on this he said, “There could be possibilities that we would examine to make it more transparent and less litigation prone, whether we can have a hybrid system where we can have the rigorous examination of resolution applicants’ eligibility in one stage and after we shortlist all eligibles, can there be an auction platform where they actually bid…that can increase confidence in the system.”

“This goes to prove that the government is exceedingly aware that IBC 2016, a law which was enacted to fast track insolvency and liquidation cases, has major discrepancies in specific areas that need to be ironed.”

New Payments Formula on the Anvil

Major Kumar, partner at law firm Corporate Professionals, points out the core concern area in providing a better deal to unsecured lenders and operational creditors, “It is important to protect the interest of operational creditors because they are very vulnerable, smaller in size and not as capable of protecting their interests but the hurdle is that because the decision making remains with secured lenders, they may try to explore other options for resolution or push the company towards liquidation.”

The government’s effort is to bring about a balance and speed up the process and for this it is in serious consultations with all stakeholders, trying to decode the gaps and work on solutions that will be effective.

As the government has been deliberating on the issue of equitable distribution of the proceeds among the creditors for quite some time, and some of the details of what changes can be made has emerged now.

Details of the Plan under Consideration

One of the proposals is that the resolution amount shall be split into two parts: 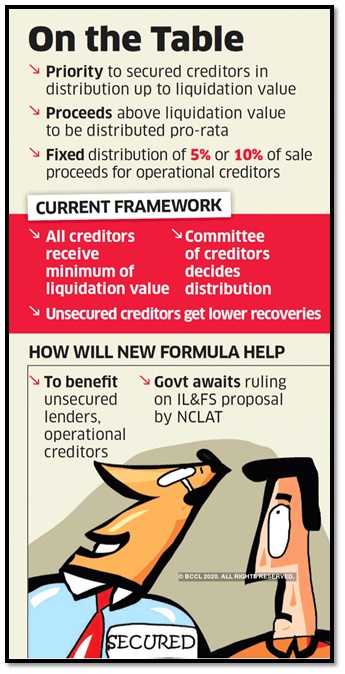 As per this plan, it is suggested that the liquidation amount be distributed to the company’s creditors with the “waterfall” mechanism which will be in accordance with Section 53 of Insolvency and Bankruptcy Code.

operational creditors. The amount which will come in excess of the liquidation value shall be divided among all creditors: secured, unsecured and operational on a pro-rata basis.

The second formula, which is being contemplated by the government, is to set aside a fixed proportion of 5% or 10% of sale proceeds for operational creditors.

Before taking the final call, the government is awaiting judgement in the IL&FS case where the National Company Law Appellate Tribunal (NCLAT) is yet to take a decision on the proceeds from the sale of the group’s entities.

“Domain Experts are of the opinion that the formula being planned will surely help in protecting the interest of operational creditors but at the same time, it may deter the financial creditors who may explore other options for recovery.”