An Insight into the Various Aspects of One Person Company

Insight into Various Aspects of One Person Company

The Companies Act 2013 has given protective rights to the members of the private limited company and LLPs (Limited Liability Partnership). However, when it comes to one person company, the rights are not protected. The Company Law Committee which was responsible for drafting the new Companies Act of 2013, put out several requirements for sole proprietors forming OPC (one person company).

This new business entity had a special structure with unique features that separated it from the traditional Private Limited Company or an LLP. This included a requirement of only one person to run the company. The company needs not to be expanded in the future and thus, it is used only by entrepreneurs who want to be the sole beneficiary of the firm. In the following sections, we will understand the meaning and functioning of one person company along with their registration procedure.

Legal Meaning of One Person Company

One Person Company came into existence only after the enactment of the Companies Act of 2013. Before this, the term had no meaning as per the older act of 1956. All the requirements that must be met to become a one-person company were only mentioned in the 2013 version of the Act. OPC was the standard abbreviation used for such companies. In these types of companies, only a single person can be a director which is not the case with other types of companies where multiple directors are required. The one director of the company is also the member and the shareholder of the firm.

As per the provisions of the Companies Act 2013, the OPC enjoys the benefits of sole proprietary business along with the status of a separate legal entity. The responsibilities and liabilities of a shareholder in the one person company are limited to a certain point. The protection norms for the OPC member are different from PLC or LLP. As per the Act of 2013, the legal Meaning of OPC is understood as an entity with the same person as the member and the director. Thus, an individual is responsible for the management of affairs of such firms. Generally in a PLC, the directors act as the agents acting on behalf of the company to manage the day-to-day operations. But, the major decision making power in such companies lies with the shareholders. However, in OPC, the director and the shareholder are the same people and he is the only one responsible for every decision.

Like other registered companies, the main regulatory authority for OPCs is the Ministry of Corporate Affairs. The Registrar of Companies (RoC) is responsible to handle all the compliance and regulatory matters of the company. These firms are handled by RoC as per the provisions mentioned in the Companies Act 2013.

Advantages of One Person Company (OPC) 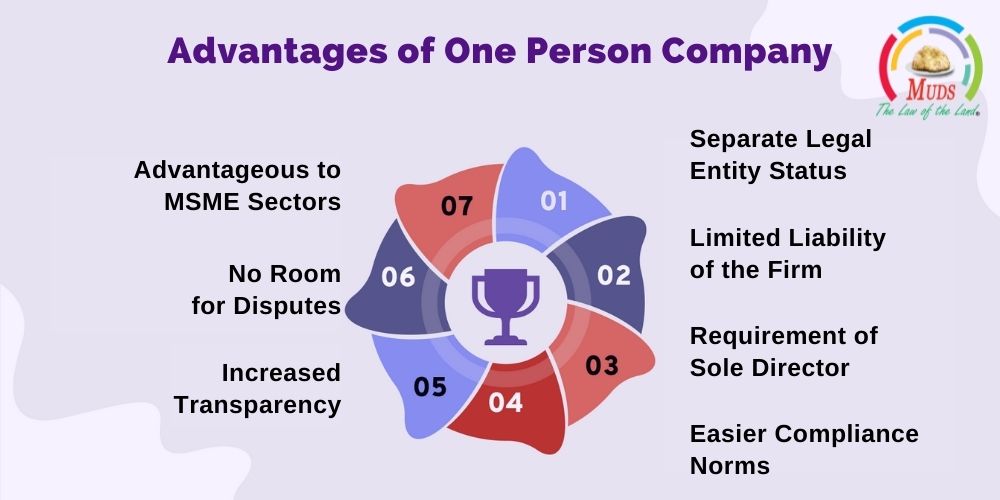 One of the biggest benefits of registering an OPC is enjoying the status of a separate legal entity. This was not possible before the enactment of the Companies Act 2013. The separate legal status gives the director or shareholder of the firm the right to take actions independently.

Limited Liability of the Firm

Another advantage and perhaps the main reason why people opt for OPC registration is the applicability of the limited liability principle. The term is understood as the limit to liabilities of the shareholder/director to a certain point. Thus, if any dispute arises concerning the debts owed by the company, its creditors cannot raise any claim on the personal assets of its director.

This is the standout feature of the OPC. The concept of a single member and director came into reality through the OPCs in the Indian market. This removed the burden of recruiting more directors in the company’s board to comply with the norms of the Companies Act, 2013. Even the appointment of Independent Directors or executive directors (as needed by the Public companies) is not required for such entities. Even the shareholder is a single person ( the director himself) to overlook the affairs of the company.

Compared with a Pvt. Limited firm or public limited company, the compliance standards are relatively easier for OPCs. The time required to meet such standards is also quite less. Even the paperwork required for its processes is less as per the Act.

The easier compliance standards for such companies have made way for more transparency in business. This is due to the fact that the OPC has lesser hurdles in completing all the compliance-related tasks. Even the government can easily inspect the affairs of such entities due to their small size.

No Room for Disputes

There are numerous points and people involved in organizations like a public limited company, partnership firm, or private limited company,  where disputes could arise due to disagreements of multiple administrators/directors. Apart from that, all the major decisions are taken by the shareholders which could also lead to disagreements between the shareholders and the directors. However, in the case of the OPC, all the decisions are taken by one person and hence there are no chances of disputes to arise.

Registering as an OPC gives benefits to the sector of MSMEs. Everyone knows that MSMEs are the reasons for the thriving economies of rural areas. With the OPC registration, the companies can give these services easily as they will face lesser restrictions due to the legal status they enjoy. Also, the legal status from registration brings opportunities for finance from public sector companies or other financial institutions. Also, this company’s director is saved due to limited liability.

Provisions for One Person Company Registration 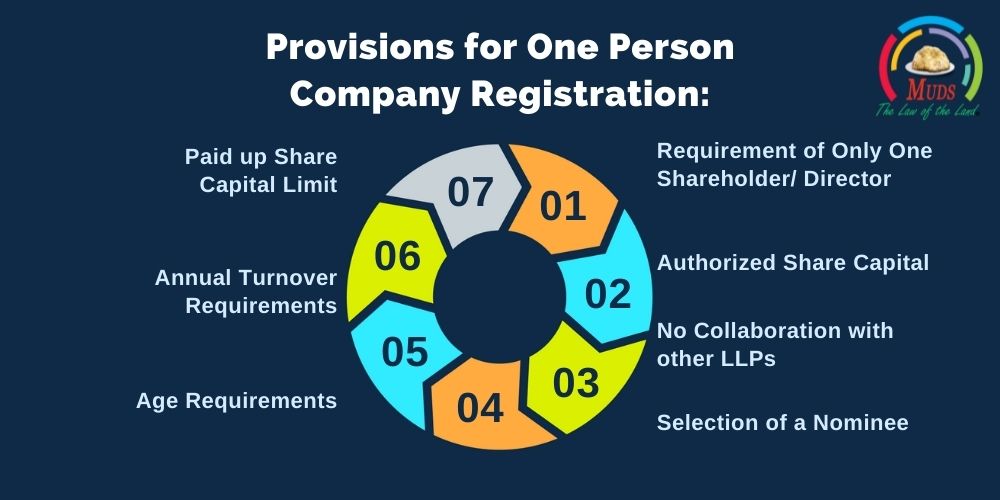 Requirement of Only One Shareholder/Director

To start the one person company's incorporation process, there must be only one director, who will also act as the shareholder. The single person performs both the duties and takes all the decisions. Note that, if there is more than one applicant, then OPC registration cannot be granted.

The minimum capital share requirement for the incorporation of OPC is Rs. One Lakh. This authorized share capital must be accumulated before applying for registration.

No Collaboration with other Private Limited Companies or LLPs

Other business firms like Pvt. Ltd. Companies, or LLPs are not allowed to become partners of the OPC.

Selection of a Nominee

The applicant must have to announce the Nominee to the company at the time of incorporation. The nominee will take over the operations of the company in case the existing director is not available. It should be noted that only a single person can be nominated for a one person company.

During the incorporation process of an OPC, even the age of the applicant matters a lot. An applicant whose age is less than 18 years (Minor) cannot become a member or director of such a company.

The OPCs are limited by their turnover as per the provisions of the Companies Act. If an OPC's turnover grows over Rs. 20 Crores for a fiscal year then it has to be converted into a Pvt. Ltd. Company. Thus, the one person company registration is not suitable for organizations that have the potential of rapid growth as they can quickly reach the limit of turnover.

Just like the limit on annual turnover, the Companies Act has also set a limit on the maximum authorized capital for one person company registration. The authorized share capital must not exceed the threshold of Rs. 2 crores. Crossing this limit will require the company to be registered as a Pvt. Ltd. Company.

The following compliance provisions have been mentioned in the Act and should be met by the company to keep its registration.

The OPC registration process requires a lot of compliance norms to be completed. Also, the share capital requirement and the provisions of registrations are a little different from the private limited companies and other such entities. However, the compliance norms are easy and thus, small companies with normal growth should apply for registration as this type of entity. Preferably, the registration process should be completed with the help of a reputed legal/financial consultancy firm. The firm will be able to handle the complete process at a nominal cost.