Insolvency and Bankruptcy Laws in India: Evolution and Challenges

Insolvency and Bankruptcy Laws in India: Evolution and Challenges

The law of insolvency and bankruptcy is critical to the functioning of any economy. These laws aid in the restructuring of a company’s various assets as well as the dissolution of these assets. The law’s primary goal is to reorganise and remedy the insolvency of corporate persons.

The Insolvency and Bankruptcy Code, 2016, is comprehensive legislation that incorporates both the subsequent elements of a debtor’s economic collapse – rehabilitation and liquidation – within its multiplicity.

The primary goal of the legislation is to restructure and resolve the insolvency of corporate people, partnership companies, and individuals as soon as possible in order to leverage the maximum value of such persons’ assets. While doing so, it is also important to boost entrepreneurship and credit availability.

What precisely do we understand by insolvency?

Insolvency refers to a situation in which a corporation is unable to obtain sufficient cash to pay off its obligations and payments in a timely manner.

Bankruptcy occurs when the court identifies and recognises insolvency while ignoring instructions for its resolution. When the court is confident that the business is insolvent, it issues an order dividing the proceeds among the creditors for the payment of the company’s debts.

One of the main barriers to bankruptcy is that the average time taken to resolve bankruptcy cases in India is 4.3 years, which is significantly longer than the time taken in nations such as the United States and the United Kingdom.

The IBC was proposed by the Bankruptcy Legislative Reforms Committee, led by TK Viswanathan. The IBC’s goal was to consolidate and reform laws governing the reorganisation and economic resolution of businesses and persons in a timely way in order to maximise the value of assets.

In the year 2016, the insolvency legislation was passed and announced in the official gazette of India with the goal of resolving insolvency matters in a timely manner, which is done by insolvency experts. Its major goal was to correct the faults made by previous legislation by separating commercial and judicial issues

The adjudicating bodies, according to the IBC, are the NCLT. Given that the IBC is the umbrella legislation that encompasses other insolvency laws, it has diminished the need for prior legislation by addressing insolvency, bankruptcy, and sick company reorganisation.

The Insolvency and Bankruptcy Code was enacted in 2016 as a major legislative change in the Indian economy. It was enacted because India lacked legislation that aided in the resolution of distressed assets and debt-laden companies. As a result, the court consolidated all insolvency rules into a single legislation, the IBC 2016.

This legislation intended to increase the flexibility of India’s insolvency rules. One aspect of this code is that it allows creditors to evaluate the feasibility of a business, decide the inspiration of the firm, and then request the liquidation or winding down of the business. The code’s goal was to create a new institutional framework that included a regulator, financial condition experts, data utilities, and assessment mechanisms to improve the formal financial condition resolution procedure and liquidation.

The Institutional Framework of IBC, 2016, has 4 pillars. 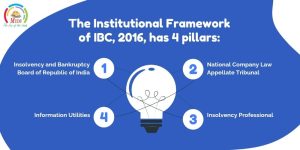 The board’s deployment and functioning are overseen by the Insolvency and Bankruptcy Board of the Republic of India. The IBC creates it as a restricted yet superior body. This board is in charge of IBC concerns and controls not just the profession but also the processes. The board is critical in implementing the code that modifies the regulations governing the conversion of bankrupt enterprises.

The NCLT, which is the adjudicating authority, hears cases involving this code under insolvency law. This authority serves as a venue for the settlement of insolvency proceedings. An appeal under the NCLT can be dismissed, or a stay of execution can be requested against the order. NCLAT is the site where NCLT appeals may be filed. The ruling of the NCLAT can be appealed to the Supreme Court, which is the highest court of authority.

The information utilities under the IBC, 2016, make it feasible to acquire and transfer information from creditors to corporations. Currently, creditors’ financial information may only be acquired through the income tax department.

The purpose of the information utilities under the IBC, 2016, is to bridge the gap in obtaining and transmitting information from creditors to corporations. Only the Republic of India’s Insolvency and Bankruptcy Board has the ability to license Information Utilities, as well as the capacity to regulate them and give access to information.

Evolution of IBC Law Over the years…….

There have been several modifications to the code since the IBC 2016 was enacted. The code has been modified five times in five years, and several important cases, such as the Insolvency and Bankruptcy Code (Second Amendment) Act 2020, have deciphered it.

The code’s regulations have been modified from time to time. The Indian courts have witnessed historic cases deciphering this code, raising the question of its legality in light of its murky regions. The implementation of the IBC has been difficult due to several revisions made to the IBC’s regulatory structure. The changes were done to make the code more user-friendly.

SIGNIFICANT TRANSITIONS TO BE NOTED

The IBC provides a time-bound resolution mechanism with the goal of increasing the value of a troubled firm. This will help not just the creditor and debtor firms, but also the economy as a whole because money and productive resources will be redeployed rather rapidly.

The establishment of this institutional framework is now in the works. The National Company Law Tribunal (NCLT) has been designated as the adjudicating body in corporate insolvency and bankruptcy proceedings. The IBBI has been established and is working to increase capacity.

The NCLT will encounter the most difficult challenges in transferring current cases to the IBC. The NCLT now comprises 11 benches, each with 16 judicial and seven technical members. Its scope includes considering matters formerly handled by the Company Law Board (CLB) under the Companies Act 2013, as well as cases handled under the IBC.

The current implementation of the IBC appears to be more concerned with rapidly operationalizing the law than with properly executing it. If these concerns are not handled appropriately, the goal of implementing new insolvency legislation to enhance the recovery rate in order to encourage the growth of credit markets and entrepreneurship would be defeated.

Will it become a successful approach?

The NCLT must guarantee that the IBC requirements be enforced without exception in each matter that comes before it, regardless of its priors. If the NCLT is structured like a traditional Indian tribunal, it will quickly create a multi-year backlog.

The Insolvency and Bankruptcy Code was the driving force behind the creation of insolvency and bankruptcy law in India. There are certain complications associated with this legislation; thus, you should review modifications and court declarations to better understand the law.

Adequate institutional capacity is required to guarantee that the IBC does not meet the same fate as previous reform initiatives such as the DRTs. Doing all of these things takes time and careful planning.

Rush thru the introduction of the proposed legislation may enhance India’s position in the World Bank’s “Doing Business” report, but it may not result in a de facto improvement of the bankruptcy resolution system, undermining the IBC’s fundamental objective.