Necessary Changes in Fdi Rules to Ensure That No Indian Company is Left Exposed to ‘opportunist’ During This Covid-19 Pandemic. 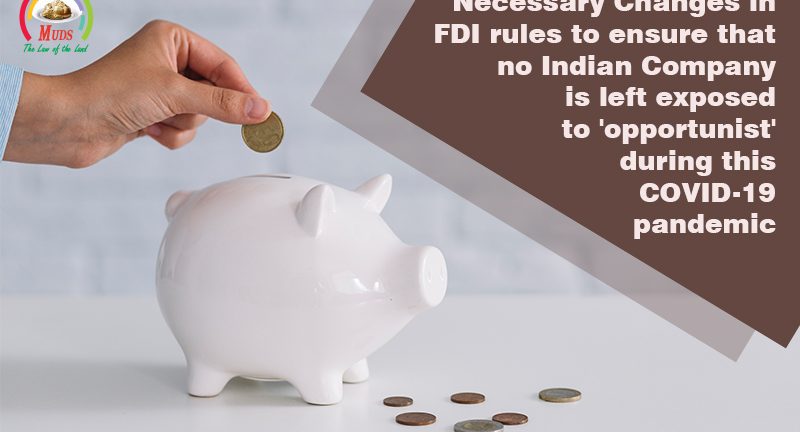 Changes in Fdi Rules to Ensure That No Indian Company is Left Exposed to ‘opportunist’ During This Covid-19 Pandemic.

As per the recent guidelines, it is clear that the Government of India is now officially in a protectionist mode.

The grave impact of the novel coronavirus outbreak on the global economy is something that no one can comprehend until countries, including India, come out of lockdown. The move which is being received with hope and enthusiasm for the most part in India amid fears of takeover and acquisition, the Department for Promotion of Industry and Internal Trade (DPIIT) has by Press Note No. 3( PN 3)  amended the Foreign Direct Investment (FDI) policy for curbing and controlling the ‘opportunistic takeovers and acquisitions of Indian companies due to the current COVID-19 pandemic’.

The new amendment requires certain investors to follow the government approval route alone, and not under the direct route of investment. In other words, with the new amendment, Foreign Direct Investors in these cases would require approval from the Government of India to invest, which would mean that the government would be able to monitor the extent of these investments and give its approval accordingly.

At the first glance, the amendment of the FDI policy may be construed by many as one which seeks to protect Indian companies from takeovers by any foreign corporate entity, however, a detailed reading of this amendment brings to light one aspect i.e. the takeovers are being prevented by corporate entities that are located in a country which shares a land border with India. The new amendment has modified the earlier position which placed some restrictions on citizens and corporate entities of Bangladesh and Pakistan.

Geographically India shares its land borders with Pakistan, Bangladesh, Nepal, Myanmar, Bhutan, China and Afghanistan (although today, this portion of India’s territory has been illegally occupied by Pakistan, which India calls Pakistan-Occupied Kashmir). Of these countries, only Peoples Republic of China has the financial capability to indulge in takeovers and acquisitions as on date.

Moreover, the news regarding the People’s Bank of China raising its stake in a major Indian lender had been met with a lot of suspicions which resulted in various speculation that the Chinese companies could try and possibly take over Indian companies due to fall in the market price during this time of the pandemic.

The proponents of the open market theory may argue that the move of the Government of India seeks to target China, and chances are they may be right in that analysis. However, given the fact that COVID-19 originated from Wuhan province in China and with several countries taking precautionary measures to protect businesses and corporate entities operating from within its borders, this argument has a strong basis of its justification that if such takeovers do indeed take place, India may open from the lockdown and find several of its corporate entities operating under the beneficial ownership of Chinese corporate entities.

Additionally, this move by India is not the first of its kind by a State – Australia and several countries in Europe have already put in place plans and concrete measures to stop such opportunistic takeovers and acquisitions.

What is interesting to note is the fact that the Government of India is not today concerned with possible suspected takeovers from European or US-based corporate entities; rather its attention seems to be focused on corporate entities backed by the People’s Republic of China.

And there is a genuine reason for this. China is renowned for its investments which its critics argue are often opportunistic and are routed in areas where it seeks to increase its clout. The continent of Africa is an appropriate example of this. China has in the past years spent billions (quite possibly trillions) dollars in the continent seeking to increase its clout in the region. In fact, it has invested in its infrastructure projects, projects involving natural resources, and also various ports. China’s African dream, however, seems to be on a rocky patch presently, due to wake of allegations of widespread racism directed at African students studying in China who ironically were accused of being carriers of COVID-19 in African Continent, which resulted in Chinese envoys being summoned by many African governments in Africa and are seeking answers about the ill-treatment of African students and their eviction from their places of residence in China.

Along India’s borders, it is well-documented that China is seeking to increase its foothold in the region, and the China Pakistan Economic Corridor (which has constantly been met with opposition by India) that would give China access to ports is one such example of Chinese ingress in areas too close for India’s comfort. In fact, there are reports that say that China has increased its investments in infrastructure projects in Pakistan in light of this proposed project.

When India opened up its market in the early 1990s with the helm of the Finance Ministry, the decision proved to be a move that saw the economy being given a shot in the arm and set India up to be a powerhouse in the decades to come.

Today, with its decision to restrict investments, the Government of India has decided that it is in India’s best interest to come out of this pandemic with its industries and corporate entities intact and still in Indian control.

Chinese companies investing in Indian corporate entities during the time of the global pandemic may not be the best idea, as argued by observers, given that there are fears among those in the industry that these corporate entities may be backed by the Chinese government to make inroads into global jurisdictions including India.

The move of the Government of India may not be fully protectionist in nature, but on the contrary, could be construed as one which will ensure that no Indian corporate entity will be shortchanged during this time of the pandemic.

India will come out of COVID-19, and when it does, there is absolutely no doubt that it would be in India’s best interest to have ownership of its corporate entities intact and in Indian control.