Strike off Company: How to Revive

Strike off Company: How to Revive

What does a Strike Off Company Imply?

Let’s start with what does strike off literally mean:

In layman’s language, strike off means “sudden attack”. But for us, it means temporary removal of the name of the company from ROC i.e. the company obtains the status of being dormant.

Earlier section 560 of Companies Act 1956 used to deal with such issues but from June 2017, Section 248 of Companies Act 2013  deals with striking off defunct companies off the register (an alternative to the winding up of the company). However, the remedy is available in form of section 252 of the Companies Act 2013, which provides such aggrieved companies a chance to restore themselves.

Now, let us try to understand which all companies could be strike off company:

Registrar of Companies or ROC is the one who has all the authority to strike off not only defunct companies but also even those companies which have failed to do all their statutory filings. The Registrar not only issued served notice mandated by law to all such companies but also subsequently struck off.

Who all can Apply for Revival:

Before jumping to the process of revival, let us look who all can make an appeal in NCLT to restore the company as per provisions of sections 252(3). It could be :

Procedure of Revival of a Struck-Off Company: 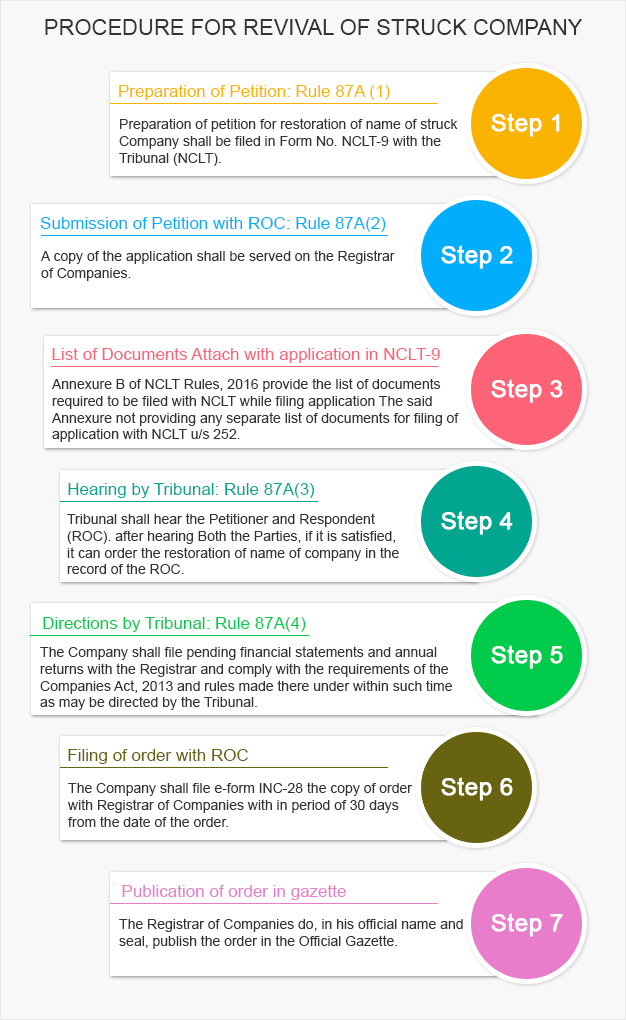 As all ROC’s has issued show cause notices to the Companies fallen u/s 248(1) (c).  In notice ROC mentioned that it can strike off Company if appropriate reply not filed within 30 days and ROC will take appropriate action against the Directors.

As ministry has taken action against over 100,000 companies due to non- compliance and non- filing of the statutory form with ROC.  It could be seen as a part of the government’s initiative :

“It could be seen as a farsighted move where the government could distinguish between companies that are black and those that are in grey”.