Definition of a Director

Under the Companies Act, 2013, a ‘director’ is one who is appointed as a director to the Board of a company.

Main Responsibilities of a Director

The Board of Directors is primarily accountable for: 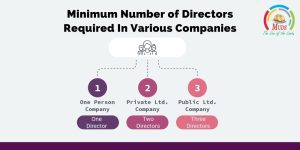 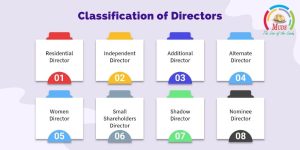 Section 149(3) of the Companies Act, 2013, states that every company shall have at least one director who has stayed in India for a total period of not less than 182 days in the previous calendar year.

As per Section 161(1) of the Companies Act, 2013, any Individual can be appointed as an Additional Director by a company.

As per Section 161 (2) of the Act, an alternate Director can be appointed by a company, if its articles confer such power to it or if a resolution is passed; in eventuality if a director is absent for more than three months from India.

This appointment comes with certain clauses:

According to Section 149 (1) (a) of the Companies Act, there are certain companies that should have at least one woman as a director on their Board.

All listed companies may have one small shareholders director that means a director elected by people possessing shares of nominal value.

The Act mandates that such listed companies may by notice to not less than a thousand or one-tenth of the total shareholders, whichever is lower, shall appoint one small shareholder’s director.

A Shadow Director is a person who is not actually appointed as a director but on whose directions the board is accustomed to act, and can be deemed to be Director of a company.

These can be nominated by shareholders, third parties through contracts, leading public financial institutions or banks, or by the Central Government in case of mismanagement.

The qualification and disqualification of directors are enumerated in detail in the Act, and vary depending on the type of director and also whether it is a public ltd. or private ltd. entity.

One qualification that stands mandatorily for all is that only an individual can be appointed as a director; stating clearly that a firm or a corporate or an association, etc. cannot hold the office of director.

Approach MUDS consultancy firm if you are looking for a revival of Struck off Company or relief for disqualified directors or any other legal tangle on which you need help.