A company comes into existence through the legal process of incorporation but the process of liquidation makes that existence come to an end. The winding-up of a corporate entity at the instance of its members is known as Voluntary Liquidation. The main purpose of voluntary liquidation is to minimize the mediation of court and to enable the members and creditors to settle their affairs among themselves. The eligibility to enforce voluntary liquidation lies only with a solvent company. Other than voluntary liquidation, a company can opt for the FTE (Fast Track Exit) mode, which is striking off the name/deregistration of a company from the Register of Companies u/s 560 of the Companies Act, 1956.

Procedure:- Then and Now

On 31 March 2017, the IBBI (i.e. Insolvency and Bankruptcy Board of India) vied its notification issued against the Insolvency and Bankruptcy Board of India (Voluntary Liquidation Process) Regulations, 2017 which came into force on 1 April 2017. Section 59 of Chapter V of Part II of the IBC, 2016 is relevant for the voluntary liquidation of corporate persons.

Rule 4 of the Transfer of the pending proceedings Rules, 2016, which has been notified on 7 December 2016 and brought into force from 1 April 2017, stipulates that all applications and petitions relating to voluntary winding up of companies impending before a High Court prior to 1 April 2017, shall continue to be dealt with by the High Court as per the provisions of the 1956 Act. All fresh proceedings for voluntary winding up on and from 1 April 2017 shall be introduced before the NCLT and shall be governed as per the provisions of the Code and the Regulations.

Procedure of Voluntary Liquidation under IBC: 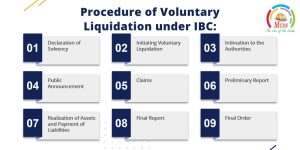 A declaration from the majority of Directors is to be made affirming that after a complete inquest, they are of the opinion that the company will be able to pay its debts from the proceeds of the sale of assets under liquidation. Also, the company is not being liquidated to deceive any person. The declaration to the ROC is to be submitted along with audited financial statements and a record of the business operations of the company for the past 2 years.

Intimation to the Authorities

The intimation is to be made to the company’s banker, tax department, and other statutory departments for the beginning of the liquidation process. The liquidator will act as its signatory and a liquidation account is opened with the bank.

The liquidator has to make a public announcement in Form A of Schedule I of the Regulations, 2017 within 5 days of his appointment. The announcement should be made in English newspaper and a local daily (i.e. one regional language newspaper).

Liquidator has to submit a Preliminary Report to the company within 45 days from the liquidation commencement date. The report ought to contain details of estimation of assets and liabilities, the capital structure of the company, proposed plan of action for conducting liquidation and estimated liquidation cost and time.

Realization of Assets and Payment of Liabilities

Liquidator has to sell the assets and distribute its proceeds to the stakeholders.

Once the liquidation process concludes, the liquidator has to prepare a detailed final report in accordance to Rule 38 of the Regulations, 2017. The report has to be submitted to the ROC and Board, and an application is to be made with NCLT for the dissolution of the company.

After verification, NCLT shall pass an order for dissolution of the company and a copy of the same should be filed with ROC within 14 days of the order.

Why opt for Voluntary Winding Up?

Except in cases of fraud, misrepresentation, etc the liabilities of a Director shall not continue to post the dissolution of the company.

Under the new code, only a licensed professional can act as a liquidator. The Code is a single-window legislative that has made the closure of the company easier and more uniform as compared to that under the Act,1956.

Under the new Code, the process is single-handedly run by a liquidator with minimal involvement of the adjudicating authorities.