Change is a recurring process in our day to day lives which makes us realize that yes we are alive and is in an indication that we are moving with the sands of time. Leading industrialist Ratan Tata also quoted that “Change is an important element because a straight line on an ECG machine means that we are not alive.” On the same footsteps when a change is made in an existing law or the existing law is repealed by a new law then it indicates that the legislature is also in operations.

The year 2016 and 2017 were very crucial years from a legal viewpoint as much new legislation got notified and the impact was that there came a flood of changes in the legislative system. To highlight a few legislations that got birth during the previous two years are as follows:

1. The Companies Act, 2013 got substituted by Companies Amendment Act,2017.
2. The taxation laws changed and there came a single tax law known as Goods and Service Tax(GST) that was a conglomerated of all indirect taxes that were merged in it.
3. Just as the year 2016 was about to end a new legislation i.e. “Insolvency and Bankruptcy code, 2016” got notified.

As per recently conducted research, it was an utter shock and surprising to see that India has bad debts records of around 11% out of the total lending and this figure is soaring up with increasing borrowing trends. The lead time to resolve an insolvency matter in India is very high as compared to other countries. As a result of which India is placed on 130th position in the list of ease of doing business. An analysis reveals that approximately 50% of the bad debts are a gift from corporates who take loans from nationalized banks. The recovery from such defaulters becomes a tedious task and is next to impossible. As a result of which these cases continue for years with zero recoveries.

Prior to the Insolvency and Bankruptcy Code 2016, there existed 12 laws which dealt with insolvency. Based on these twelve laws, it took around four years to wind up a corporation in our country. The prevailing laws miserably failed to recover the outstanding dues from the defaulters.

The laws had many loopholes which kept defaulters fear free and safe. At one point, due to lack of legal and institutional setup, the defaulters started considering India as a safe haven for carrying out default which clearly revealed the incompetence of our legal framework as compared to global standards.

With the accelerated pace of ongoing defaults, Government finally decided to take a stand. It was now that the government decided to overrule the existing insolvency laws with the anew stringent law which would cater to taking action against existing defaulters in a time-bound manner thereby setting an example for defaulters who considered the act of committing default a piece of humor.

Before directly diving into the newly crafted code, it of importance to understand two terms on which the entire code rests.

Merely insolvency does not provide sufficient grounds to lenders to file the petition for bankruptcy of lender or to forcefully liquidate the lender for his assets.

In legal terms, Bankruptcy refers to the legal process for liquidating a business, which cannot pay out it’s fully out of its current assets. Bankruptcy amounts the failure of business which does not happen in the case of voluntary winding up.

Bankruptcy is of two types: voluntary (when undertaken by the insolvent director himself) and involuntary (forced by court order on a petition being filed by creditors).

Though the above two terms are mostly used interchangeably they have different meanings of their own. It is of a need to understand that “Insolvency precedes bankruptcy”. The interpretation is that first a person will initially face insolvency and untapped insolvency ultimately leads to bankruptcy.

Having gained an understanding of terms that form the base of the code it becomes necessary to have an insight into the legislation that prevailed prior to the new code.

The insolvency and bankruptcy code (IBC) was amongst the biggest economic reform in the country. It had the robust roadmap to deal with distressed businesses. Before the introduction of IBC, the lenders were at the mercy of big borrowers. The code follows a time-bound procedure as the case once admitted are required to be resolved with the prescribed time limit or else the company then goes into liquidation.

Prior to enforcement of the IBC code, the sickness relating to corporates was being addressed by the Sick Industrial Companies (Special Provisions) Act, 1985 and the winding up of a company matters as enacted under the Companies Act, 1956 remained static for quite a long time and were being dealt by High Courts and later for enactment of Companies Act, 2013 by the National Company Law Tribunal (NCLT).

Further in order to speed up the recovery of dues of the banking and financial institutions, The Recovery of Debts due to Banks and Financial Institutions Act, 1993 (later renamed as The recovery of Debts & Bankruptcy Act,1993) was enacted giving the exclusive jurisdictions to entertain such cases by Debt Recovery Tribunals(DRTs). Afterward, the Securitisation and Reconstruction of Financial Assets and Enforcement of Security Interest Act, 2002(SARFAESI Act,2002) came into being so that secured creditors could take the possession of secured assets without the intervention of courts and realize the dues by disposing of such secured assets.

Therefore, there were multiple legislations. The IBC was enacted with a view to encouraging entrepreneurship and innovation thereby to facilitate ease of doing business. The preamble of the code also states that it is an act to consolidate and amend the laws relating to reorganization and insolvency resolution of Corporate Persons, Partnership Firms, and Individuals.
The insolvency and bankruptcy code in its very entry phase set aside the provisions of above prevailing legislations as a result of which the prevailing pieces of legislation got overruled by the provisions of the Insolvency and Bankruptcy Code. 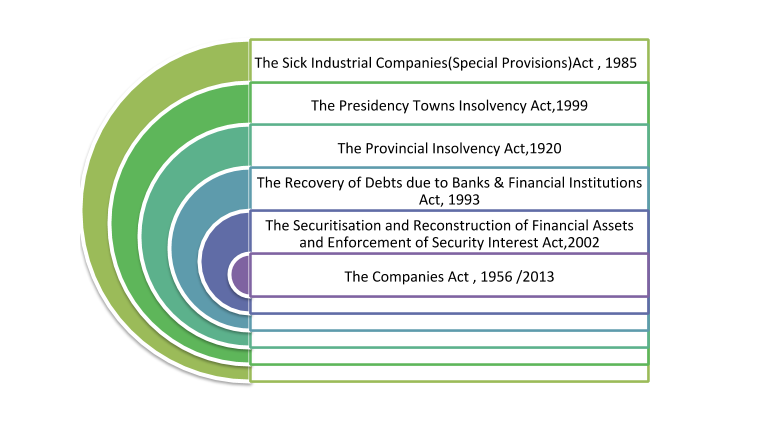 Footsteps of Insolvency and Bankruptcy Code, 2016

The bill was presented in the Lok Sabha on 21st December 2015 and was referred to a committee of Parliament, which gave its report on 28th April 2016. It was then passed by Parliament on 5th May 2016. The Insolvency and Bankruptcy Code(Amendment ordinance, 2017) was issued by the Gazette Notifications effective from 23rd November 2017. Later this ordinance was passed by both the houses and received the assent of the President on 18th January 2018 and notified as The Insolvency and Bankruptcy Code (Amendment)Act,2018. The (Amendment) Act is deemed to have come into force on the 23rd day of November 2017. The code contains 255 sections and 11 schedules. The genesis of footsteps of IBC is as follows:

Having gained acquaintance with the footsteps of IBC code it becomes necessary to be familiar with the extent and objectives of the IBC.

Territorial Extent of the code

The target audience of IBC

The list of target audience covers almost every person within its ambit. Therefore the matters would be in high number because all persons are covered under the scope of IBC. 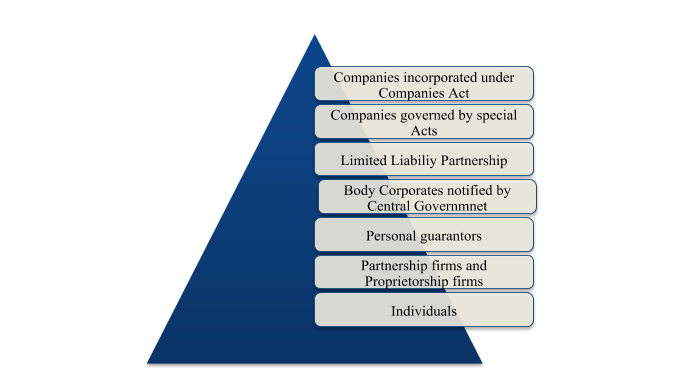 Pillars of the Insolvency and Bankruptcy Code

The premises of the Insolvency and Bankruptcy Code is constructed on five pillars. These five pillars have the responsibility of carrying the entire load of the IBC. These pillars are the key to the innovation infrastructure.

1. Insolvency and Bankruptcy Board of India(IBBI)
Every regulation has a supreme authority specially designed for effective execution of that legislation. In the case of the Insolvency and Bankruptcy Code, it is IBBI which has been bestowed the commanding power. It shall be the apex body whose main focus would be to promote transparency and governance in the administration of the code. The IBBI being the supreme commander and regulator shall be involved in setting the infrastructure for effective functioning of the code and providing accreditations to the Insolvency professional agencies and the insolvency professionals.

3. Insolvency Professionals(IP)
These are professional experts who shall ultimately practice and carry out the Bankruptcy and Insolvency process. For becoming an IP one requires to obtain membership from IPAs and simultaneously get registered with IBBI for practicing the Insolvency laws. The IPs are licensed professionals who conduct the insolvency resolution process and acts as liquidators at the hour of liquidation. At present, there are only 2037 IP who are currently practicing insolvency laws.

4. Information Utility(IU)
These are centralized repositories of financial and credit information of borrowers. Their main role is to store the financial information of the borrower in electronic form and to validate the stored information as well as claims of creditors with that of the borrowers when needed. The maintaining of financial records of borrowers in electronic form will eliminate delays and disputes about the facts as an when the default occurs. As per data available there is only one entity i.e. “National E-Governance Services Limited “which is registered to function as IU under the IBC.

5. Adjudicating Authorities(AA)
Every drafted legislation is crafted out in such a manner that it encompasses predefined authorities who would provide remedies and resolve disputes that crop up during the implementation and execution of the legislation. In the Insolvency and Bankruptcy code, there is a clear bifurcation of the adjudicating authority. In order to resolve disputes quickly and for effective execution there are two separate Adjudicating Authorities in the code. 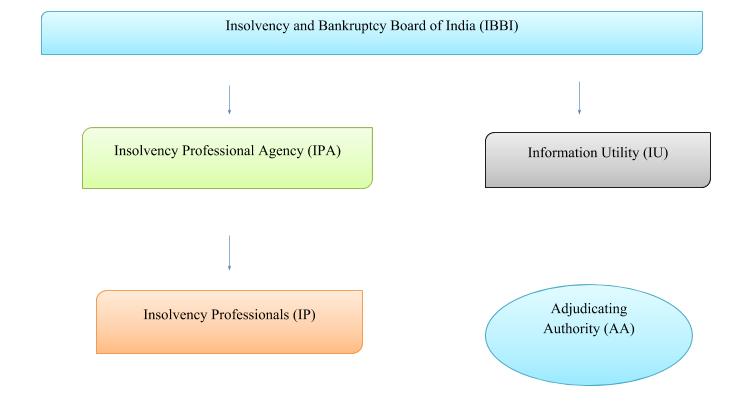 The newly crafted Insolvency and Bankruptcy Code is a detailed legislation which encompasses in it all the procedures and remedies available in the case of insolvency and bankruptcy. One cannot gain acquaintance and become well versed with the code in the very first instance. Hope this article was helpful in developing basic insight into the code.

For the latest updates on the code stay connected with MUDS.