Liquidating a company is mentioned as a procedure in which a limited company is brought to a close through the appointment of an Insolvency Practitioner (Liquidator).

The company’s assets are then liquidated (sold) and any realisation of revenue is distributed in order of priority.

Dissolution is when the company is struck-off the registrar of companies, this is the final stage of the process of liquidation.

Can one Liquidate his Limited Company on his own?
The precise answer to this question is no. All insolvency procedures require the services of a licensed insolvency practitioner. For the best insolvency professionals in Delhi contact us at Muds Management.

The directors usually fear that they will not be able to pay for the process of liquidation. More or less almost all liquidations can be paid for by the way of realisation of company assets or directors redundancy payments. You can contact our teams at MUDS for a confidential discussion on how your liquidation might be funded if this is an area of concern and get the finest advice from bankruptcy professionals in Delhi.

The Different Types of Liquidation

The compulsory procedure is usually begun by creditors via an order from the court.

All three of these are explored in more detail below.

A CVL (i.e. Creditors’ Voluntary Liquidation )is used by insolvent companies and is introduced by a shareholders’ resolution. It includes the dissolution of the insolvent company as well as the redistribution of the company’s assets to the respective creditors. Through this procedure the directors are able to write off unsecured limited company debts that are not granted personally.

Directors often see the process of voluntary liquidation as a welcome and safe exit from a stressful situation; while addressing all of the creditors, suitably.

In case, the limited company has liabilities that it cannot manage to pay but you would like to move on without the pressure of the company’s debts hanging over your head then in that case, this type of business liquidation may be an appropriate option.

Although liquidating a company via this route should be seen as a last resort, as it can be considered as a rational decision and it may not necessarily mean the end of business.

A MVL (i.e. Members’ Voluntary Liquidation) is an apt way to liquidate a solvent company and can be used as part of an exit strategy.

An MVL may be considered in case, you have a solvent company that you want to close as part of your business plan.

The company might have outlived its purpose and be heading towards a natural end of trading, or you may wish to extract the value of cash and assets from the company in the most efficient manner.

For an MVL, the directors ouht to sign a declaration stating that there are no remaining creditors.

Compulsory Liquidation of a Company

Compulsory liquidations are ordered by a court and are usually initiated by a creditor that is looking to force a company into closure. The process is usually advanced with a winding up petition and once it is heard at court, it turns into a winding up order.

This procedure is often used to wind up the business as a last resort by displeased creditors after failed negotiations over missed payments. This insolvency procedure is usually handled by an appointed Insolvency Practitioner. Thus, this is not a voluntary process for directors.

The conduct of the directors is reported back to the court at the end of the liquidation proceedings and failure to cooperate with the Official liquidator can have serious impacts.

The situation can escalate quickly in case, you cannot pay the creditor and do not act immediately. Any threat in the form of a winding up petition should not be ignored, as the intention is to forcefully liquidate your company.

The Liquidation Process in a few easy Steps

The details of the process when voluntarily liquidating a limited company depends largely on the type of liquidation process that is opted for. However, the basic steps below are included within all of the procedures:

Time duration for this procedure

There ain’t any set time-frame for liquidating a limited company and with several variables dependent on each case, it is challenging to provide a specific time-frame without sufficient information.

However, once engaged, the Insolvency Practitioner ought to act immediately and the company can be placed into liquidation within a two-to-three week period in case sufficient information is provided, accurately.

The liquidator has to remain in office until all of their responsibilities have been addressed.

Once it is decided that a company has to be liquidated, the time-frame can be fairly rapid, with the company in liquidation within around 24 days. There is a minimum statutory notice period for creditors of 14 days so, with an assumption that at least 90 percent of shareholders have agreed to the short notice, it could potentially happen in as little as 70 days. 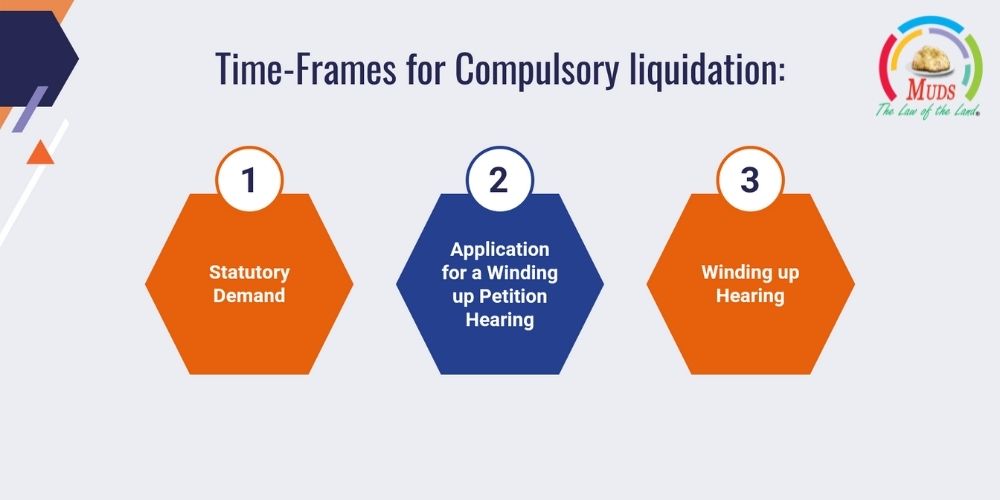 Before the compulsory liquidation, the following stages follow the given time-frames:

Role of a Liquidator

An appointed Liquidator (i.e. licensed Insolvency Practitioner) is needed for liquidation and they have several duties in their kitty. These professionals have a huge responsibility to act as an impartial, third-party to oversee the process from beginning to end, post their appointment.

The role of a liquidator comprises of various responsibilities which include, but are not limited to:

The Potential Consequences for Directors while liquidating a company

The most crucial thing for directors is to realise that while liquidating a company is that their responsibilities to undergo a marked shift in case the company becomes insolvent.

Once insolvent, it is important for the directors must prove they have acted in the best interests of the creditors. In order to avoid the threat of personal liability, it is important that directors act responsibly and take professional advice, as soon as possible.

It is important to note that the Directors should be aware that once an Insolvency Practitioner is appointed, they will have a responsibility to investigate the actions of company directors for the period preceding the liquidation.

In case, this can be proven, then the director may become personally liable for some or even all of the company debts.

Difference between Winding up, Liquidation & Bankruptcy

Liquidation and ‘winding-up’ are two terms that are often used in the same context. Both of these terms refer to the process of liquidation of a company; the reason can be any, either because the company has cash-flow problems, or because there are cash and assets, such as property, that the directors and shareholders would like to extract.

Sometimes people mistakenly refer to the phrase “company bankruptcy”. But it is important to note that bankruptcy is only relevant to an individual, partner, or sole trader and not a limited company.

The Liquidator’s duties also include addressing the priority of claims during the insolvency process. IN order to find out who gets paid and in what order, including how employees are addressed and to get the best in class bankruptcy professional in Delhi visit out web page www.muds.co.in

Do the Employees Get Paid in such a case?

This is a frequently asked question which we would cover in more detail here.

The various nitigrities like wages, wage arrears, holiday pay and notice pay are all covered up to certain statutory limits by the liquidators and the remaining part goes as per the orders of the court.

When you are thinking about liquidating a company due to financial problems, take the time to think and compare all of the available options. There are plenty of courses of action that may be available to companies in financial difficulty, it is important to consider exploring these before you decide to close the company via liquidation.

You may find that options such as a Company Voluntary Arrangement (CVA) or Administration that provide a viable way for the company to carry on trading. Insolvency procedures are considered to be useful ways of restructuring a private company and would also require a licensed insolvency practitioner to supervise the entire process, professionally.

An example of a benefit could be after an Administrator has been engaged as well as appointed they can apply for a moratorium to be implemented. This might be beneficial as it provides the business with some breathing space and protects it from further legal action taken by creditors. The business can then address its liabilities, assets specifically its employees to help guide the company towards a state of recovery.