The eligibility norm for beginning the liquidation procedure

The voluntary liquidation process under IBC is largely an out-of-court process. Once the incidents of the corporate person have been completely settled and its assets fully liquidated can the liquidator applies to the National Company Law Tribunal for its detachment along with a final report. Pursuant to this application, the tribunal ought to pass an order for dissolution and the entity will be dissolved from the date the order is passed.

Procedure for Liquidation Process Under IBC 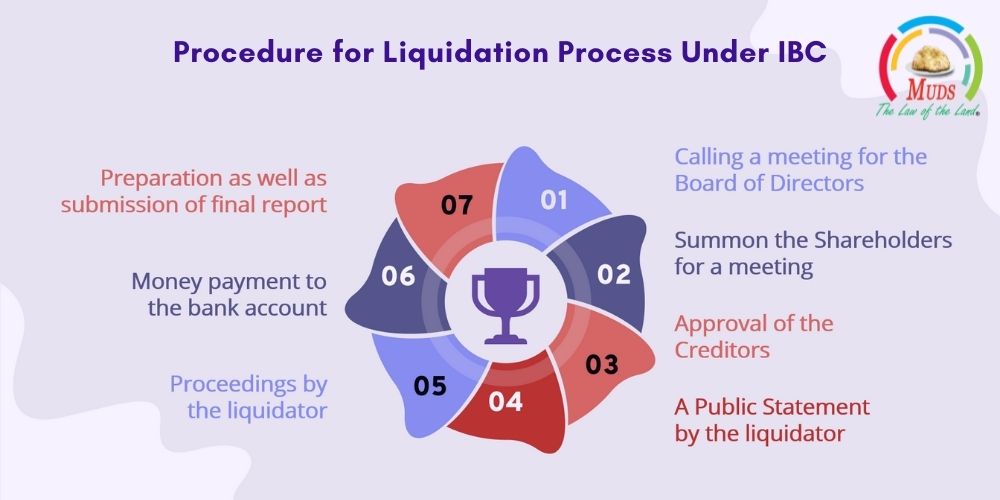 A few questions that generally come to our mind are:

What are the elementary procedures used to liquidate an insolvent company in your jurisdiction? What are the key characteristics and necessities of each? Are there any regulatory or structural distinctions between voluntary liquidation and compulsory liquidation?

Step-1: Calling a meeting for the Board of Directors

First and foremost, the Company would have to call a meeting of the board of directors with the presence of a majority of its members. They would in turn, pass a resolution for the winding-up of the Company. They would have to formulate a statement in an affidavit that a complete analysis and examination has taken place about the debts that the Company has. The Company would pay all the debts from the revenue of the sale of its assets. The affidavit should also include that the liquidation of the Company is not taking place to defraud any person (applicable under Section 59(3) (a) of the Insolvency Code 2016).

Step-2: Summon the Shareholders for a meeting

Secondly, the Company has to call a meeting of its shareholders within 4 weeks of making this statement. During the meeting, the Company would conclude for the appointment of a liquidator. The details for the same would get mentioned in the resolution made during the meeting. The liquidator would make every effort to complete the work of liquidation within 12 months from the date of commencement of liquidation. He would keep the electronic or physical copy of all the important documents and papers for the next 8 years after the dissolution of the company.

Step-3: Approval of the Creditors

When the Company incurs any debts for different individuals, creditors comprising of two-thirds of the entire debt would have to give their consent in writing within 7 days of the making of the resolution by the shareholders for liquidation of the Company.

Step-4: A Public Statement by the liquidator

Step-5: Proceedings by the liquidator

The liquidator ought to open a bank account in the name of a corporate person for the disbursement of money because of the creditors of the Company.

Step-7: Preparation as well as submission of final report

An operational or financial or a corporate debtor may apply to the National Company Law Tribunal for the commencement of the insolvency resolution process following the default by the corporate debtor to pay dues of at least Rs100,000.

The code stipulates a timeframe of 180 days for the insolvency resolution process, which sets up from the date that the application is approved by the tribunal (but may be extended a further 90 days). During this time, no proceedings, suits, recovery or enforcement action can be initiated or continued against the corporate debtor. The committee of creditors shall contemplate and approve resolution plans which are placed before it for judgement and viability determination.

Once the liquidation triggers, the following may occur:

Formal approval of the liquidation procedures

Voluntary liquidation mandates the process to be introduced by the corporate debtor itself, through its directors or partners, and it must be passed by both its shareholders (in the case of a company) as well as creditors.

Timeframe for completion of liquidation procedures

The timeframe for completion of a compulsory liquidation process is typically within two years of the date of initiation.

On the other hand, voluntary liquidation can be concluded in a shorter period. The regulations under the Insolvency and Bankruptcy Code set out that in the event that the liquidation process is not concluded within 12 months, the liquidator shall hold a meeting with the other contributors within 15 days of expiry of the 12-month period and by the end of every succeeding 12-month period thereafter until the dissolution of the corporate person. The liquidator also has to present an annual status report signifying the progress of liquidation during each meeting.

Process of appointment of the liquidator and defining the extent of his or her powers and responsibilities:

The liquidator is authorized to:

After the National Company Law Tribunal appoints a liquidator for liquidation, it periodically administers the liquidation process. The law authorizes that a preliminary report should be submitted to the tribunal within 75 days of the commencement of the liquidation, describing the capital structure of the corporate debtor as well as the estimate of both assets and liabilities based on the corporate debtor’s books. As per the preliminary report, the liquidator must submit quarterly progress reports to the tribunal which in turn would indicate progress in liquidation, details of stakeholders and details of the property that remains to be sold or realized. Henceforth, both the sale as well as the distribution of assets to the claimants are also conducted under the tribunal’s supervision.

To what extent are the creditor’s involved the extent in the process of liquidation and what actions are they prohibited from taking against the insolvent company in the course of the proceedings?