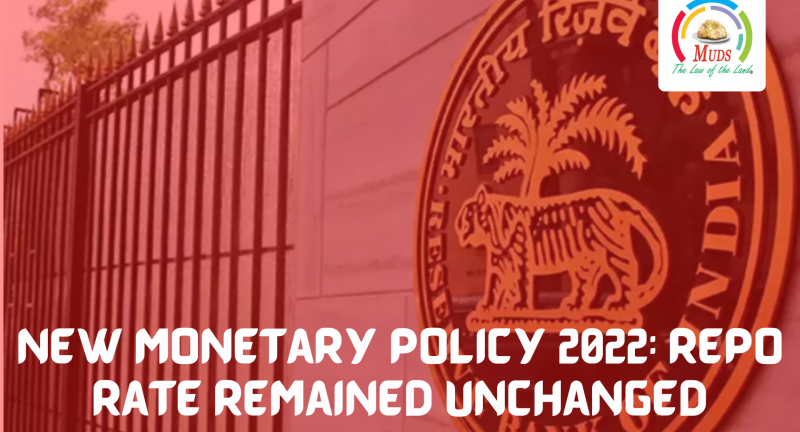 The MPC decided unanimously to continue the accommodating approach, according to the central bank governor, and the reverse repo rate was also remained steady at 3.35 percent.

The Marginal Standing Facility (MSF) rates and the lending rate were likewise held steady at 4.25 percent.

On May 22, 2020, the RBI reduced its policy repo rate, or short-term lending rate, in an off-policy cycle to boost demand by decreasing interest rates to a historic low.

In a press conference following the Monetary Policy 2022 meeting, Das stated that the RBI will return the liquidity adjustment facility (LAF) corridor to 50 basis points (bps), as it was pre-Covid. The MSF rate and the bank rate remain at 4.25 percent.

“It also agreed to remain accommodating while concentrating on withdrawal of accommodation to ensure that inflation remains within the goal moving ahead, while encouraging expansion,”

-he added on the central bank’s attitude.

” It will continue to be part of the RBI’s toolbox, and its use will be at the discretion of the RBI for objectives that are indicated from time to time. The FRRR, in conjunction with the SDF, will increase the flexibility of the RBI’s liquidity management framework.”

The RBI reduced its growth prediction for the current fiscal year to 7.2 percent from 7.8 percent previously, while increasing its inflation forecast to 5.7 percent from 4.5 percent.

He went on to say that, given the inordinate volatility in international oil prices as of early February, as well as the extreme uncertainty surrounding the evolving geopolitical tensions, any projection of growth and inflation is fraught with risk, and is largely dependent on future oil and commodity price developments.

Das addressed liquidity and financial market circumstances in his speech, stating that the RBI will continue to take a sophisticated and agile approach to liquidity risk management while preserving appropriate liquidity in the system.

ATM cash withdrawal without a card that is interoperable

“The recent RBI Monetary Policy 2022 did not include any surprises,” stated Nish Bhatt, Founder & CEO of Millwood Kane International, “it held rates constant for the 11th straight policy.” However, it has clearly outlined the road to policy unwinding. The emphasis will now be on withdrawing the accommodating policy stance in order to keep inflation under control. The RBI’s statement today plainly suggests the end of loose Monetary Policy 2022, which is reflected in the 10-year benchmark yield, which has reached a multi-year high. The unwinding of liquidity will cause some instability, and it is expected that the RBI would drop the growth rate prediction for FY23 to 7.2 percent, with the inflation target raised to 5.7 percent from 4.5 percent previously. The explicit goal of central banks throughout the world is to manage inflation, unwind lose money, and concentrate on gradual and steady development.“