Any symbol or mark used to differentiate one person’s products and services from those of another, or to identify the origin of such goods and services, is referred to as a trademark. However, it is widely assumed that a trademark exclusively pertains to words, symbols, or emblems. This perception is only partially correct, as words, symbols, and logos are not the only markings that may be used as a trademark for a company. Other types of marks, such as sound, taste, smell, texture, motion, and shape, can now be registered thanks to advancements in intellectual property law.

These changes have taken several forms, the most notable of which is the international Trade-Related Aspects of Intellectual Property Rights (TRIPS) agreement, which establishes definitions and minimum criteria for intellectual property rights, including trademarks.

Graphical representation of mark for registration

The ability to display any sort of mark in a graphical style is a necessary component of having it registered. This entails being able to write it down on ‘paper’ and preserving and publishing a copy of it in the Trademark Registry. 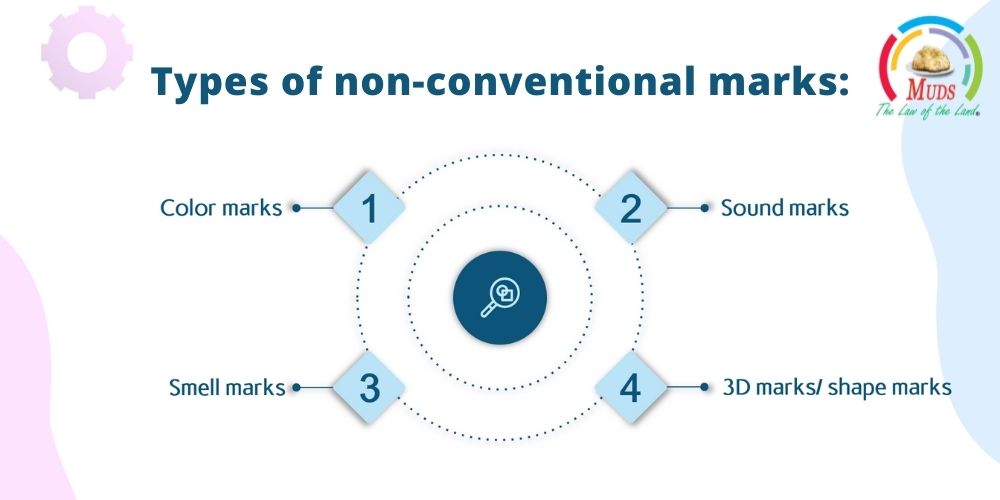 Colors are one of the first things that people notice, therefore it’s best to take advantage of this first impression while developing a company’s brand. A colour mark is a mark that uses at least one colour to create a distinguishing identity in connection to products or services. Color markings can be registered as either a single colour or a mixture of colours. In contrast to traditional trademark registration, a colour mark can only be registered if it has already gained distinctiveness as a result of its usage in commerce, i.e. the colour is sufficient to identify the source of the products and services.

The European Court of Justice (ECJ) previously stated that identifying goods only based on colour is unusual. In this case, granting trademarks for specific colours would be anti-competitive due to the restricted amount of base colours available. That isn’t to say that trademarks for specific colours aren’t awarded – for example, Louboutin, a footwear company, is recognized for its distinctive vivid red sole. Cadbury, on the other hand, has lost its colour trademark for the purple that adorns its chocolate packaging in the United Kingdom.

One of the reasons the UK Court took such action was to prevent one company from having a permanent monopoly on a certain colour. Even in India, the Delhi High Court denied Louboutin’s trademark rights to the red colour for the same reasons as the UK Court, refusing to award a single colour trademark.

As the name implies, a sounds mark is a form of the mark in which a sound is utilized as a trademark. Sound has become increasingly important in identifying a business, thanks to the rise of social media platforms that use audio features such as TikTok, Instagram Reels, and others. Any sound mark must usually meet two conditions to be registered –

The sound mark must be included in the trademark application, and a graphical representation of it must be produced in the form of musical notations, or the sound must be able to be represented on paper, if feasible.

For example, the MGM Lion’s roar, which cannot be expressed musically, might be characterized as “a lion’s roar.” Yahoo’s yodel was the first sound mark to be registered in India. Other well-known sound marks include the Looney Tunes Theme Song, Raymond: the Complete Man’s well-known sequence, Britannia’s four-note bell sound, and so on.

However, not all sound markings are registrable; if the sound mark isn’t unique enough, registration may be rejected. For example, in 2013, Anheuser-Busch InBev, a beer business, sought for the registration of a sound mark consisting of “Two clicking noises at intervals” intended to imitate the sound of a beer can opening.

A 3D mark can be applied when a specific product can be identified based on its shape and/or packaging. Although there are various elements to examine when evaluating applications for 3D marks, the most important aspect is whether the form of packaging has become necessary to the product’s identification.

The Singapore Intellectual Property Office refused registration to ‘Ferrero Rocher’ for its well-known chocolate coated balls wrapped in golden paper in 2019, claiming that the packaging was not distinguishable without the sticker bearing its work mark.

Other well-known 3D marks include Kit-Kats chocolates with wedges, and the shape of a Coca-Cola bottle, Zippo lighters.

The scent of freshly ground coffee upon walking into a coffee shop, or the petrichor after the first rain of the year, are both enough to bring back memories and transfer you to a new location. The sense of smell in humans is highly powerful and capable of being recorded in human memory; it can elicit emotions and influence a consumer’s attitude toward a product.

Unlike other non-traditional markings, even though scent marks are theoretically permissible, just a few have been registered yet.

Ralf Sieckmann, a German patent attorney, applied a scent mark for the chemical methyl cinnamate in the case Ralf Sieckmann v. Deutsche Patent and Markenamt. He attempted to describe the aroma using its chemical formula, describing it as “balsamic all fruity with a little tinge of cinnamon.” The German Trademark Office and the European Court of Justice both rejected the scent’s trademark application, claiming that a chemical formula was insufficient to infer any fragrance. Furthermore, the fragrance must be represented clearly and exactly.

Non-conventional marks remain a modern idea, and while there are hurdles to their registration, these should not be used as a deterrent to applying for non-conventional marks. These roadblocks, on the other hand, are evidence of the evolution of Intellectual Property law and should be viewed as stepping stones toward the adoption of new means of differentiating one’s firm.

For years, Muds Management has advised and assisted the customers in registering their trademarks in record time. So, to protect and expand your business, get your trademarks registered now!