Are You Trapped By A Malicious POSH Complaint Against You? 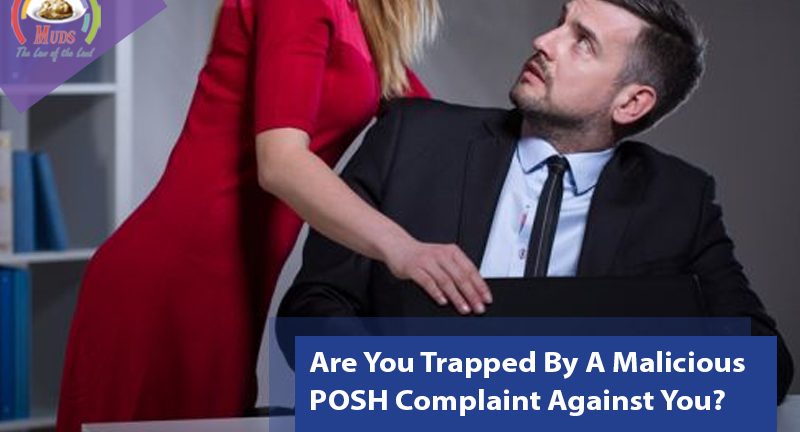 Trapped By A Malicious POSH Complaint Against You?

You might have seen in Bollywood movies like Aitraaz where the second female lead files a malicious complaint against the male lead in the company just because he rejects her sexual advances. This results in the male lead getting fired from the organisation despite being innocent.  You can also find other such movies and stories about false or fake Sexual harassment complaints that completely ruin the careers of innocent men in them.

Although the above scenario is from a movie, it is rapidly becoming the reality of modern corporates. Lately, we have seen a lot of articles and various data reports suggesting that the loopholes present in the PoSH Act 2013 are engendering a plethora of false accusations against the male workforce in organisations. There are many reasons due to which malicious complaints are filed in corporate organisations. The reasons could be

If a man is guilty of a sexual offense in the workplace, then he is liable to be punished under the provisions of the PoSH Act but what if someone maliciously implicates a man in such a case? How he can save his career and reputation from the catastrophic results of such accusations and the repercussions of being called a sexual delinquent? Well, we at Muds are here to help you with your options. Many people are afraid of taking legal help in such cases due to the lack of understanding of PoSH laws and fear of reputational damage. Here we will give you solutions for tackling malicious PoSH complaints and tell you how our legal help can save your reputation and your career.

Section 14 of the PoSH Act 2013 addresses this issue of the false complaint by giving provisions of punishment for the complainant. In case the complaint is found to be untrue and filed with malicious intent then, the internal complaints committee can take action on the complainant. But the punishments prescribed in the act have proven insignificant as the number of false complaints under the PoSH act continues to rise with every passing year. This is where taking legal help can play a big role to save your career and make the complainant pay for the reputational damage and stress they have caused.

Take for example the case of Anita Suresh vs Union of India & Others (W.P (C) 5114/2015) in Delhi High Court. The court found the petition lacking any merit and dismissed the case. It also ordered the complainant to pay Rs. 50000/- for filing a false complaint and granted ESI-Corporation freedom to take strict action against her.

Currently, the main issue with the act is that it is harder to determine whether the complaint was malicious just on the bases of lack of proof. This leads to many false complainants get away without any punishment even if their accusations prove to be wrong after investigation. So, if you have been a victim of a malicious PoSH complaint, then you must take legal action against the complainant to ensure they won’t leave without facing any consequences.

What You Can Do if Trapped in Malicious PoSH Complaint?

If you are innocent and being framed in any malicious complaint then, you can take the following steps to sail through the process of judgement:

Effects of Malicious PoSH Complaints on the Accused

Most of the organisations follow the policy of suspending the alleged perpetrator until the investigation by the internal complaints committee is finished for the safety of the victim. Therefore, false sexual harassment complaints can make the situation miserable for any innocent man being implicated for such an offense. It brings mental stress, financial problems, and social humiliation for the accused until the time investigation is underway according to internal complaints committee guidelines. Being labeled a sexual offender for no reason proves immensely hurtful and could lead to the person taking extreme steps to get away from the trouble.

A recent example of this was the suicide of a Senior Employee in Genpact in December 2018. The employee committed suicide after a complaint was filed against him in the POSH committee of the organisation. While the sexual harassment committee was still investigating the offense, the respondent under scanner committed suicide and denied the allegations labeled against him in his suicide note.

This case has led many thinkers to question the repercussions of false complaints in the PoSH Act 2013. Many people do not possess the courage to fight against these false allegations and could succumb to the mental stress and public humiliation that follows. Sometimes the investigations could take a substantial amount of time to complete and the alleged employee must bear with the image of a sexual offender. All this takes a huge toll on the mind of any innocent man who has fallen prey to any fake complaint made against him due to any reason. This also proves to be hurtful for the family of the concerned person as they are constantly under the judgmental eyes of society.  To save the innocent from all these unnecessary problems the companies can take various steps to stop false complaints. In the following sections, we will discuss such steps and discuss how as an individual you can save yourself if you are trapped in any such case.

Problems Faced by Companies in Dealing with False Complaints

The main issue most companies face in any case related to PoSH law is the temporary loss of productive resources. Suspending the accuser or anyone with malicious complaints leads to the loss of valuable resources for the employer until the investigation is finished. Also, it requires the organization to invest a significant amount of capital and work hours in research related to such cases. Therefore, it is deemed necessary for the organisations to set deterrents to avoid the filing false complaints with the PoSH committee. Before we move further and discuss what are the deterrents organisations take to stop malicious complaint filing, let us understand the effects these complaints have on the accused. 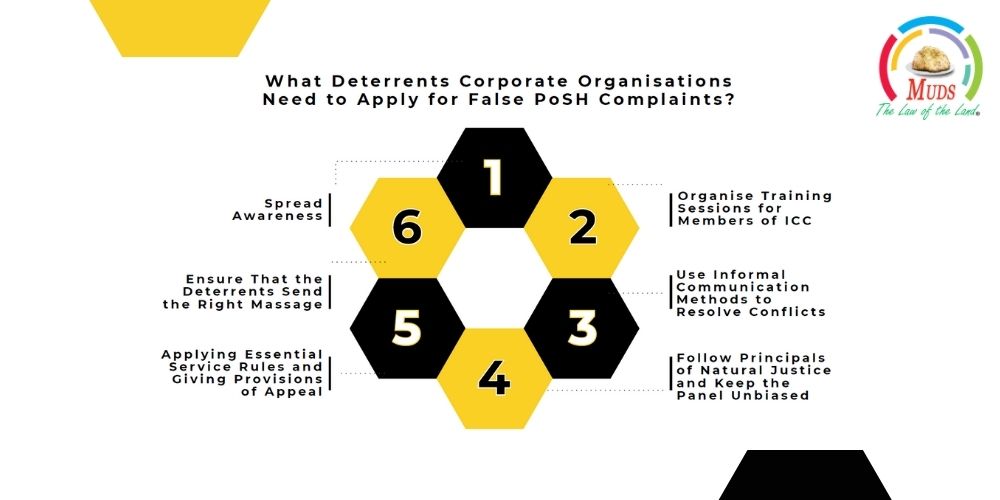 Like we saw examples of how courts are getting stricter on malicious complaints under the PoSH act, we at Muds would like to assure anyone looking for guidance on how to deal with false complaints. Anita Suresh’s judgement of the Delhi high court has paved the way for the government and corporates to think deeply about handling the malicious complaint of sexual harassment of women at the workplace. The numerous cases of sexual harassment which prove to be untrue also bring into light the misuse of the PoSH act to settle personal vendetta against any men.

With this favorable judgement, we must think that the need of the hour is to be sensitive towards such cases of harassment and do not start shaming the man right away as it could prove fatal to him if he is innocent. The society and the sexual harassment complaints committee of the corporates cannot be biased mentally with the conceived notions of ‘men are always wrong, and women never lie in such scenarios. Our laws should ensure that a wronged woman must get justice but should also ensure that any innocent man doesn’t get wronged in the judicial process.

Our principles of social justice and socialism should not get extreme up to the point that they become a weapon of misuse for vested interests or ulterior motives. A right balance must be struck in the provisions of this law that ensures that the innocent is not punished and the guilty never gets away without punishment. If we can do it in the coming years, we will be able to create a safe and happy workplace environment for women and men.

How Muds Can Help You Legally? 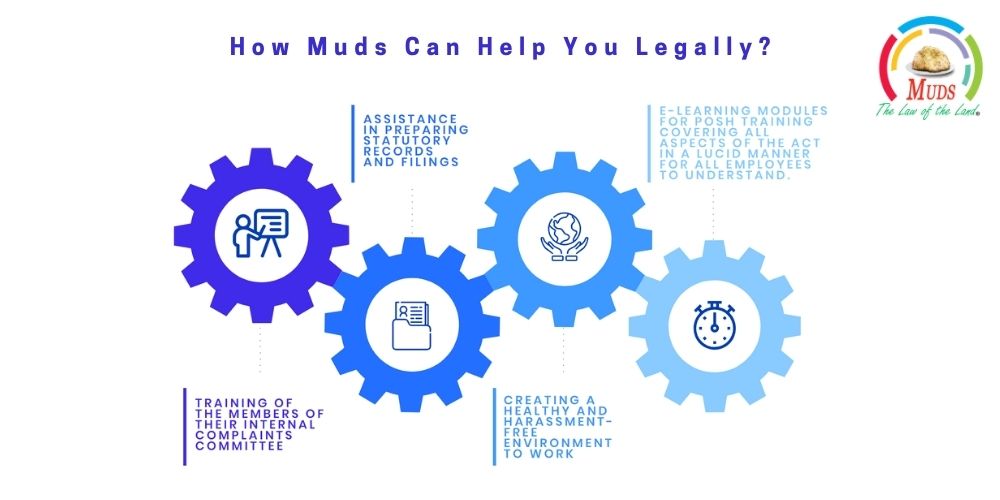 Muds Management is a consulting firm that specializes in PoSH Act and can help you if you are dealing with a malicious PoSH complaint. We provide complete legal support to our clients for proving their innocence and ask for compensation for the damage done to their reputation and career. Muds also work with corporates to create awareness among their workforce about PoSH Act 2013 via Offline and Online Training. We also help corporates in the management of sexual harassment policies like

You can contact our legal experts on 91-9599653306 to get a free consultation about PoSH compliance or any legal help with complaints or cases.