POSH Act: Understanding Role of Workplace Bullying and Back Bitching

Workplace bullying has unfortunately become a common phenomenon among many corporates across the world. Humans tend to attach too many emotions to their career and thus everything happening in their corporates lives affect their behaviors. This could drive feelings of jealousy towards a relatively successful colleague or feelings of superiority or inferiority complex among employees depending upon the success in their career. All these complex emotions lead to employees competing with each other and lead to workplace politics with discrimination/bullying. This includes mocking, intimidating, or spreading malicious rumors against a fellow employee for character assassination.

In many cases, this happens to women in the workplace in form of shrewd remarks made by their colleagues or fake rumors about her having a relationship with her superior to gain momentum in her career. All these things tend to give women unnecessary stress and judgment despite them working hard to achieve success. Let’s understand this with a fictional scenario based in a corporate.

Suppose there is a group of men and women working in the software development team of some organization ABC. The team has a male manager who handles and allocates daily tasks for the team and keeps a record of the performance of every employee for annual appraisal. After a year, the manager promotes a female colleague due to her exceptional performance throughout the year. Now, if any other female/male colleague out of respite or jealousy starts spreading a rumor about the promoted woman having an affair with the male manager for the sake of promotion, then it will not only disparage the promoted woman’s hard work and reputation but also demeans the company’s management. This scenario will, of course, make the working environment hostile for the woman due to the rumor-mongering. This rumor-mongering may also lead to mocking behaviors towards that woman which could lead to stress and humiliation for her.

Sexual Harassment of Women At Workplace

5.    Any other physical, verbal or non-verbal conduct that is sexually colored and unwelcomed by the victim.“

Sexual harassment of women at the workplace can be easily summed up as gender-based discrimination in the working environment that violates the basic fundamental rights of women conferred by the constitution of India under Articles 14, 15, and 21. Of course, this leads to growth impediments and stressful environments for women in an increasingly competitive scenario where they constantly need to prove their worth compared to men. Health and safety issues or reasonable apprehension humiliation in the working environment is also understood as sexual harassment.  For example, if any gesture of a co-worker created and venomous sexual environment for a female companion then it will be categorized in the workplace sexual harassment.

The scenario of Sexual harassment and PoSH act in India

Bullying is unwanted, unreasonable, and repeated aggressive behavior against any individual due to respite or jealousy. This includes the use of mockery, physical or verbal threat, or dominating behavior to display power over others. The harm of bullying is considered more psychological than physical and has a long-term impact on the mental health of an individual. Now, this coincides with the acts of workplace sexual harassment when the remarks intended for mockery are sexual then they can be punished under the PoSH act. However, not all the acts of workplace bullying are covered under this Act and thus, victims have to understand other legal methods to tackle it.

In our country, where there have been apprehensions among families about their women working outside, most of the cases of sexual misconduct go unreported as women feel that if they report such cases their families won’t allow them to work due to safety concerns. Also, the social stigma and victim-blaming that is prevalent in India lead to women keeping quiet on such cases to avoid facing social humiliation. The landmark case of Vishakah vs the state of Rajasthan changed the situation in India as it was the court’s judgment, in this case, served as the benchmark to define workplace sexual harassment till the PoSH Act was enacted. The Vishakha Guidelines to deal with sexual harassment cases were used extensively by Indian employers till the time the PoSH act came into being.

Understanding Workplace bullying and its Situation in India

Bullying is mostly observed in colleges and schools. In the workplace, the form of bullying is more subtle and involves psychological intimidation through a position on the corporate ladder or prowess at the work. Unwanted criticism, misuse of authority, unnecessary exclusion of an individual, insulting or using foul remarks/rumors to malign someone’s character on their back are the different ways a person can be bullied in the workplace. Here, the bully generally doesn’t realize that they are bullying someone or what effect their behavior is putting on someone’s psychology. And this is why giving proper behavioral training to employees and making them aware of the consequences of workplace bullying could tend to this problem effectively.

In our country, there are no specific laws to punish individuals committing workplace bullying. It is seen as more of a social stigma rather than a criminal offense. However, various issues that come under bullying can be tackled by different sections of the IPC (Indian Penal Code). Like Section 323 – voluntarily causing hurt, Section 340- Wrongful confinement, Section 339 – Wrongful restraint, and section 506- criminal intimidation punishment, can be used to tackle workplace bullying. Because bullying is generally non-sexual and the harassment is more based on religion, age, power dynamics, or jealousy, it can’t be punished under the PoSH act. Although spreading rumors about someone having a sexual affair or disparaging someone’s character based on sexual nature comes directly under the PoSH act and can be punished under it. 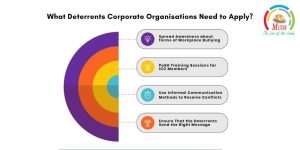 1.  Spread Awareness about forms of Workplace Bullying: Most of the time the complainants are not aware of the PoSH laws and the implications of any unwanted behavior that could lead to PoSH complaints. This is where the tool of awareness can come in handy. Employers must create awareness amongst their employees regarding internal complaints committee guidelines, the consequences of bullying an employee through sexually colored remarks, rumors or mockery.  Employees should be properly trained regarding the difference between bullying and acts that fall under the framework of the PoSH act.

2. PoSH Training Sessions for ICC Members: The POSH Act read with applicable rules clearly specify that the employer must ensure and make provisions for conducting orientation programs and seminars for the members of the ICC. Organizing capacity-building and skill-building programs for the members of the ICC will ensure that there is a well-trained and skilled committee of members in place who are well informed about the subject matter. A well-trained and skilled internal complaints committee shall be able to adjudicate the complaints more efficiently and shall be able to decide on the complaints effectively after considering and analyzing the situation and the facts along with pieces of evidence placed before them. There is no doubt that dealing with workplace sexual harassment complaints is often complex, that is the reason, the POSH Act, itself acknowledges the importance of having a committee in place which possesses critical skills/capacity to effectively carry out their roles.

3.  Use Informal Communication Methods to Resolve Conflicts: Many a time there is a misunderstanding between the parties, and the intent of the accused gets misconstrued differently to the complainant. To prevent such situations, the POSH Act mandatorily requires the ICC to explore the possibility of conciliation between the parties before initiating an inquiry and at the request of the aggrieved woman take steps to settle the matter between her and the respondent through conciliation, provided the basis for such proceedings are not a monetary settlement.

4. Ensure That the Deterrents Send the Right Massage: Setting a deterrent for false complaints does not imply that the organization is unwilling to take any issue of sexual harassment. Any employee facing sexual harassment should not feel apprehensive of filing complaints because of the deterrent as it will nullify the basic essence of the PoSH Act.

Employees must be encouraged to bring into notice anything undesirable or uncomfortable for them. Employers should have access to all the effective measures that can be taken against sexual harassment and workplace bullying.

Workplace bullying does violate the right of an employee to work with the dignity that has been given by Article 21 of the constitution of India. Furthermore, articles 42 and 43 direct the states to provide healthy and humane working conditions for an employee to work in. This is also part of the PosH Act that seeks to ensure a safe working environment for women in India. Any employee must understand that in our country workplace sexual harassment is a legal offense but there are no such laws yet for workplace bullying. Thus, an individual must understand sexual harassment law to understand what kind of bullying acts comes under the framework of the PoSH act.  This is where taking legal help becomes necessary and PoSH training plays a big role in it. Taking the help of a legal firm, in these cases, would be the ideal way as they understand the various forms of the acts. The professional could make all employees aware of the differences between bullying and sexual harassment. This will help in reducing cases of workplace bullying and sexual harassment and ensure a safe and happy working environment for the employees.